skip to main | skip to sidebar

Please Direct your Attention to...

My livejournal. I honestly can't stand the general layout, features and lack of activity that blogger has. Livejournal has always been easier and MUCH more customizable and more social able.
If you came here on a whim, hello and I'm sry to cut this short.
Luniara's Livejournal
Blabbed by Luniara at 4:10 PM No comments:

I am, and this is going to be a while to go away, if at all.
Here.
A few commissions...

I update anything I do really on DeviantART, but I'll post some stuff here that I didn't upload there.
First one was my first draft for my yearly dedication to my sister. I wanted to go with a more full shot to make it not resemble last years so much. Next one is just a Christmas gift commission someone requested. I have not uploaded this to DA yet even though I love how it came out!
Other than that, I really hate this blog layout. I can never figure out how to work the picture alignments...

I can't believe the last post I made was last year. What is it that keeps me away from this site? Is it lack of comments and views due to my social internet behavior or just lack of things to say? I remember my Livejournal. I used to blab constantly.
Blabbed by Luniara at 10:14 AM 1 comment: 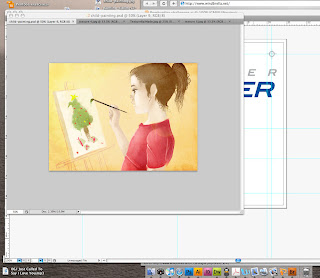 A tad depressed and some things on my mind, I decide to paint something in photoshop for my Father for Christmas. I used a reference, but that is okay. I stopped using it after a while and removed a lot of elements.
Merry Christmas to you all though.
Hope it is a good one for you.
Blabbed by Luniara at 3:42 PM 2 comments:

I am predicting that today is going to be a stressful one. Today is my annual review at work and with how slow this year has been, I am sure my bosses will be fickle in how they judge my work. Overall, there was a lot of procrastination despite how I always get all of my work done. I don't see myself getting a pay raise or a bonus. Alas.
Christmas will suck this year. I'm rather hoping it will end soon so I can reframe from spending money or worrying about it. Times is hard living alone.  That book lady has yet to get back to me. It's okay really, I always have commissions once I catch up.
Anyways, I have something to post today. Something I am proud of! I was designing a sorta winter outfit for Lune and ended up with this!
Blabbed by Luniara at 9:45 AM No comments:

I replied to an ad on Craigs-list about an Illustrator needed for a Children's book. It's rather cheap pay, but it could be good for my portfolio. The woman was pretty much looking for 5-7 illustrations of her and her puppy. She is having me do sketches so she can choose between 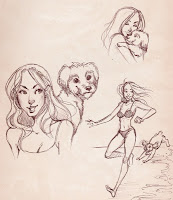 me and another artist. It would be nice, despite how it's rather gay to have a book about a grown woman (who is rather busty and pretty!) and her poodle. lol! Very nice woman though.
I'll update you if I get the job or not. Her times are a bit crazy (She wants them done by January!)
For now, here is the sketches I did. As crappy as they are...
Blabbed by Luniara at 2:03 PM No comments:

Luniara
Deerfield Beach, Florida
I'm a Graphic Designer, but my roots have always been illustrating and comics. At one point I dreamed of working for Disney, but now I'm on a free floating balloon- and I'm bound to find SOMETHING eventually. As most artists do. There isn't much to know about me that won't send me into a long ramble. This isn't about my life, it's about my art. I try to update as much as possible, but my inspiration has been dwindling as I get older and start working harder.